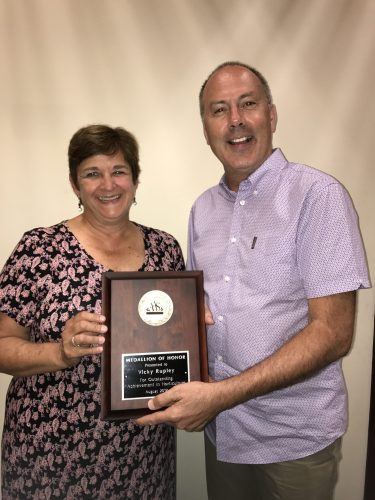 The prestigious AAS Medallion of Honor is presented to an individual who has given a lifelong dedication to the advancement of horticulture. All-America Selections is pleased to announce that the 2017 Medallion of Honor recipient is Vicky Rupley of Harris Seeds in Rochester, New York. Vicky started her career by attending the University of Rhode Island, including a summer internship pollinating tomatoes at Harris Seeds. She then went on to UC Davis in California and received a Masters in Agriculture Education earing her credentials to teach and lecture on vegetable crops. In 1985 Vicky transitioned to the industry, working at Harris Moran Seed Company, Ball Seed, Sluis & Groot and Harris Seeds where today she serves as the company’s Executive Vice President. In addition to her professional career, Vicky has generously given of her time as a member of the National Garden Bureau Board of Directors from 1995-1998 then as a member of the All-America Selections Council of Judges beginning in 2006. While serving as a judge, Vicky then joined the AAS Board of Directors as a Director, Vice President, President, Past-President from 2007-2015.