Sweet peppers bring a rainbow of colors and a plethora of shapes to the table.

It is easy to value them for looks and flavor alone, but sweet peppers are a nutritional powerhouse as well. A serving of the most popular type in the USA–the sweet bell–contains more vitamin C than the average orange, a generous amount of vitamin E, and many antioxidants with only 29 calories. Peppers have high nutrient levels at any stage but are the most beneficial when eaten fully ripe.

Home gardeners can find many varieties of sweet pepper plants that are AAS Winners whether purchasing seed or transplants at your local garden retailer. The variety and nuance of sweet pepper flavor compares to fine wine, coffee, or chocolate. Sweet peppers are also similar to other foodie obsessions in that many cultures and regions have different favorites. Cooks love the flexibility and wide spectrum of possibilities sweet peppers offer in the kitchen. Pepper plants are easy to grow, require very little space, and are an attractive addition to any garden, yard, or balcony.

Peppers are native to South and Central America, tracing back to the Oaxaca region of Mexico somewhere between 4000 and 6000 B.C. Ancient complete and partial peppers have been found, well preserved in caves during archaeological excavations. The way the peppers were found suggests that they were consumed as both dry seasoning and fresh.

Over the years peppers became popular across the Americas. Records show that as of 2007, the world produced nearly 27,000 metric tons of peppers (sweet and hot combined). The top ten producing countries that year (in order starting at the top) were the People’s Republic of China, Mexico, Indonesia, Turkey, Spain, United States, Nigeria, Egypt, South Korea, and the Netherlands.

Sweet bell peppers are a cultivar of Capsicum annuum. Non-pungent banana peppers, sweet jalapenos, and sweet cherries are also members of capsicum annuum. Sweet peppers are called sweet because they do not produce capsaicin–a chemical that causes a “burning” sensation when hot peppers are consumed (or when they come in to contact with the eyes or nose etc.). Sweet peppers lack capsaicin due to a recessive form of a gene that eliminates capsaicin and, consequently, the “hot” taste usually associated with the rest of the Capsicum genus.

Sweet peppers are actually a fruit (because they come from a flowering plant and contain seeds) but treated and spoken of as a vegetable. Worldwide, each culture has its own preferred shapes, textures colors, flavors, and recipes.

“Bell” is a term that refers to sweet peppers with 3-4 lobes. Bell might either refer roughly to the fruit shape or to the pendulous way the fruit hangs from the plant. In the U.S. the 3-4 lobed fruit that is nearly as wide as they are tall are referred to as “blocky” bells and the elongated bell peppers are called “half-long” bells (half as wide as they are long). Bells can be found in many colors including red, yellow, orange, purple, chocolate, and ivory. 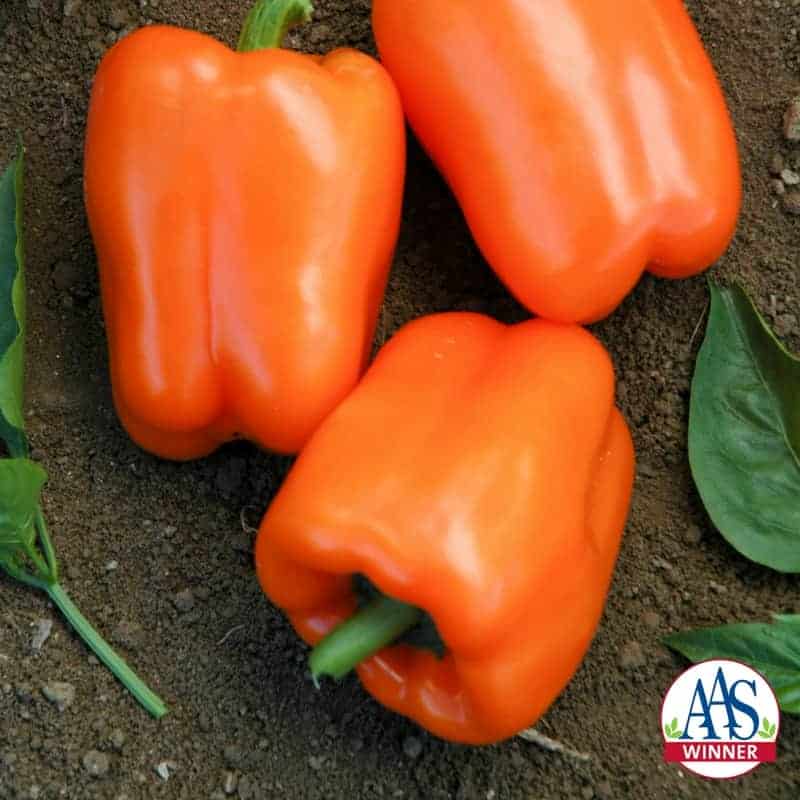 Expect a very sweet flavor at full orange color about 65-70 days from transplant.

About 6 to 8 inches long, the tapered green pepper will mature to red on the 30-inch plant. 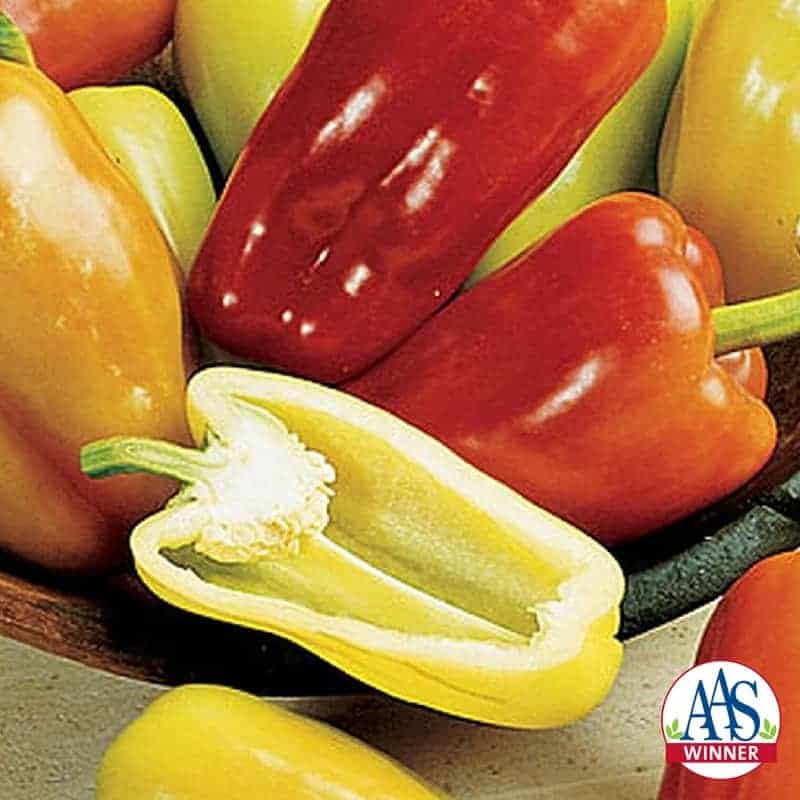 “Bull’s Horn” peppers are sweet and wide at the shoulder, tapering to a point. They often have thicker walls than the blocky bells and commonly mature to red. They are thought to have been brought to the U.S. from Italy and are also called “Corno di Toro”- which translates to “Horn of the Bull.”

An early bloomer with bright yellow jewels with a deliciously sweet and fruity flavor. 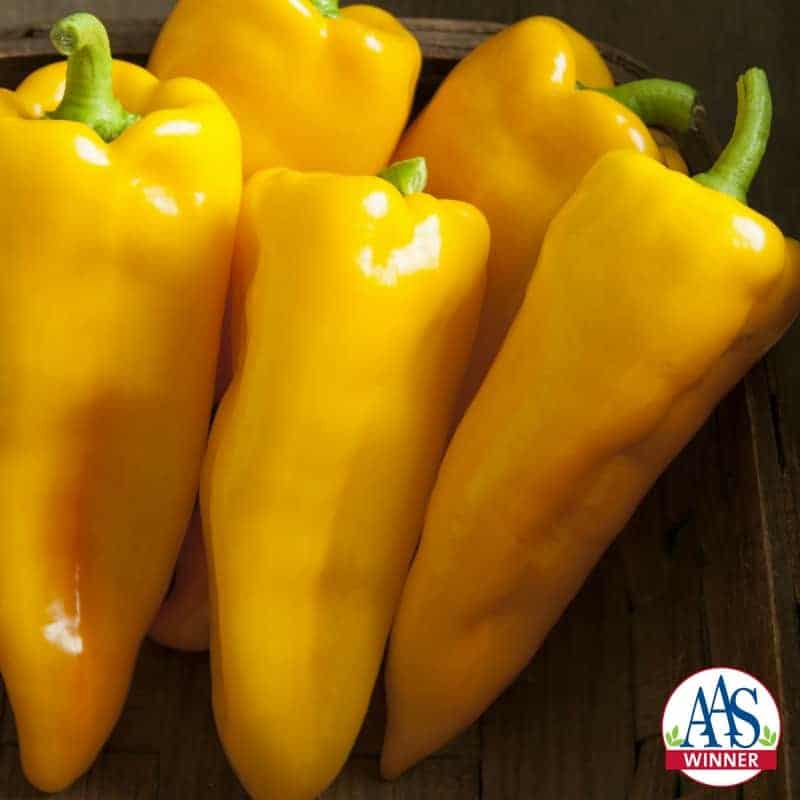 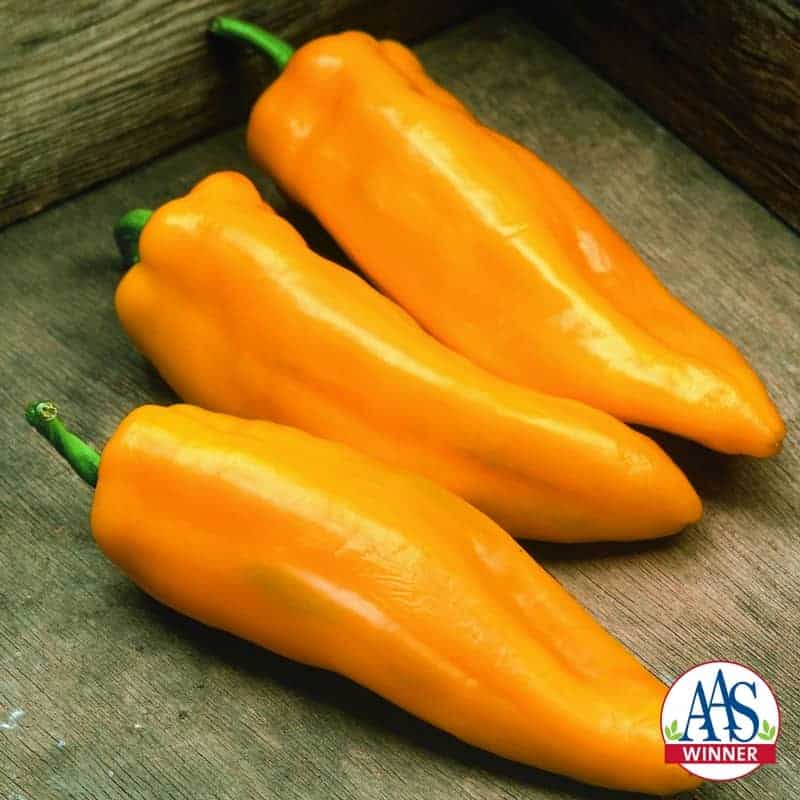 Mini-Snacking peppers have been popular with home gardeners for many years and have gained popularity in U.S. grocery stores in the last 10 years or so. They are blocky, pointed, thin-walled, sweet, and come in bright colors including, yellow and orange. The best snacking peppers are crunchy and have just a few seeds or no seeds at all. 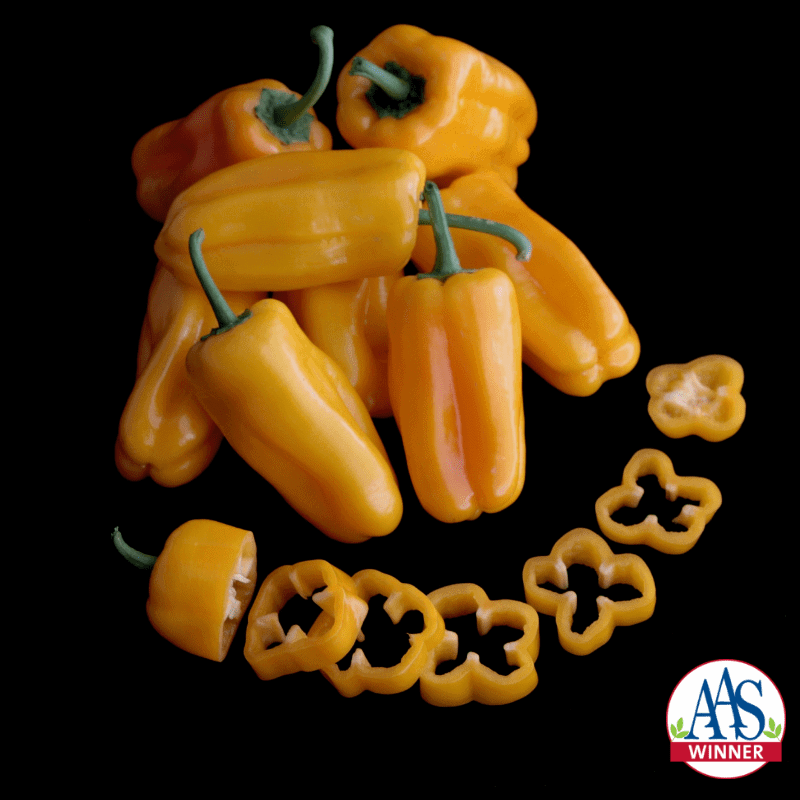 Deliciously sweet fruit with thick walls on plants that grow up to 36 inches tall and 15 inches wide. 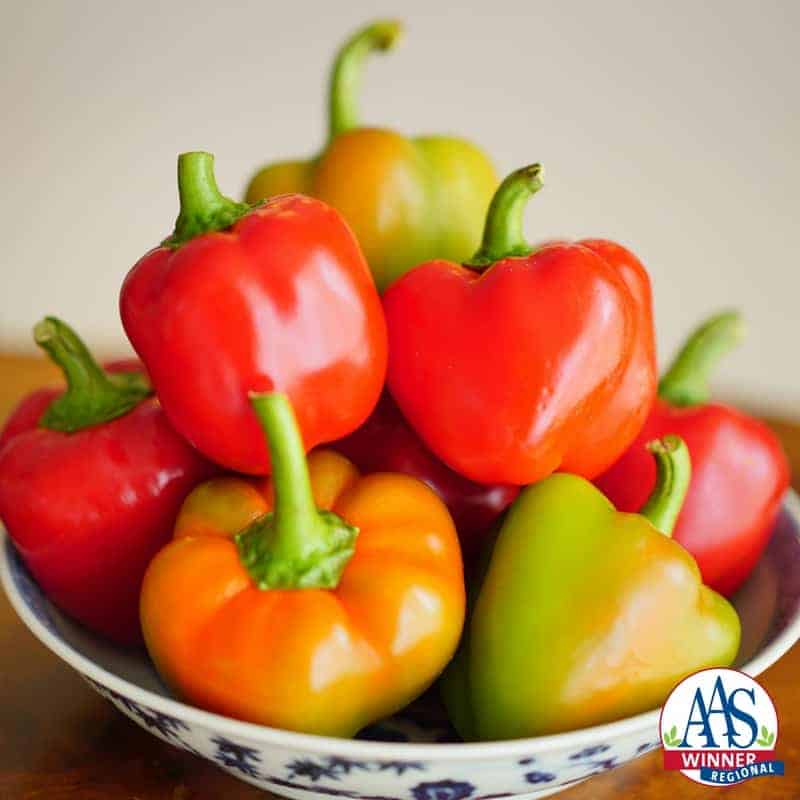 A miniature bell pepper with excellent fruit set even under hot and humid conditions. 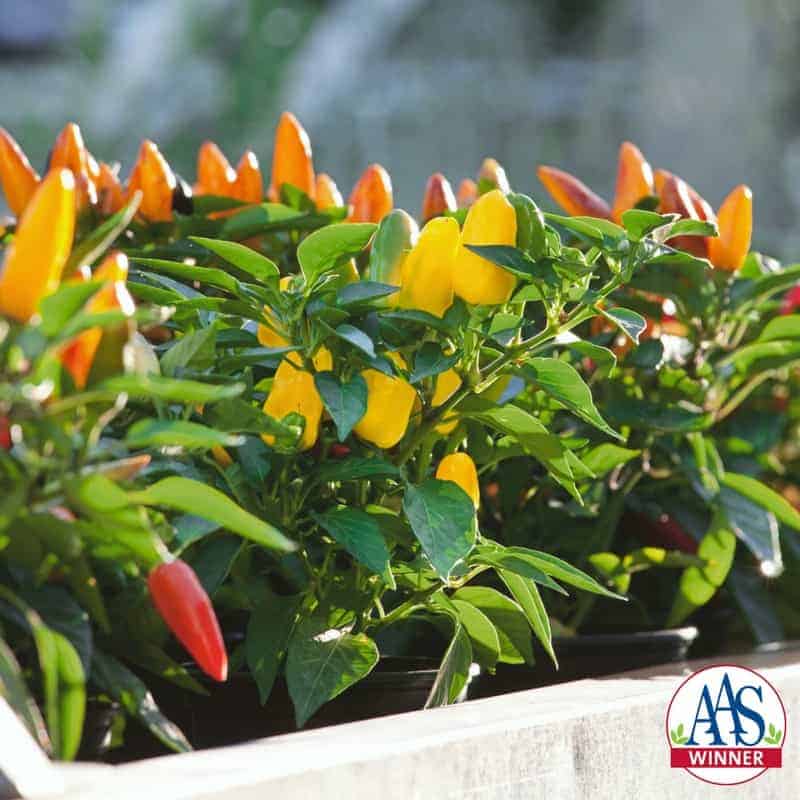 A sweet, multi-colored pepper on a compact 18” plant that is very ornamental too.

And now we enter the dangerous territory of varieties that can be either sweet or hot. Bananas are long and thin and usually mature from a light green or yellow to red. They are used fresh and pickled as rings. Because there are both sweet and hot banana peppers available, be sure and order the seed or buy the plant you prefer. Sweet jalapenos and habaneros are also available, like the AAS Winner Roulette pepper that has all the taste of a habanero but not heat. Then we have a capsicum baccatum variety, Mad Hatter that is common in South American cuisine having a sweet citrusy aroma and taste. These varieties are worth searching out–the flavored revealed by removing the burn is a pleasant surprise for the pepper enthusiast. 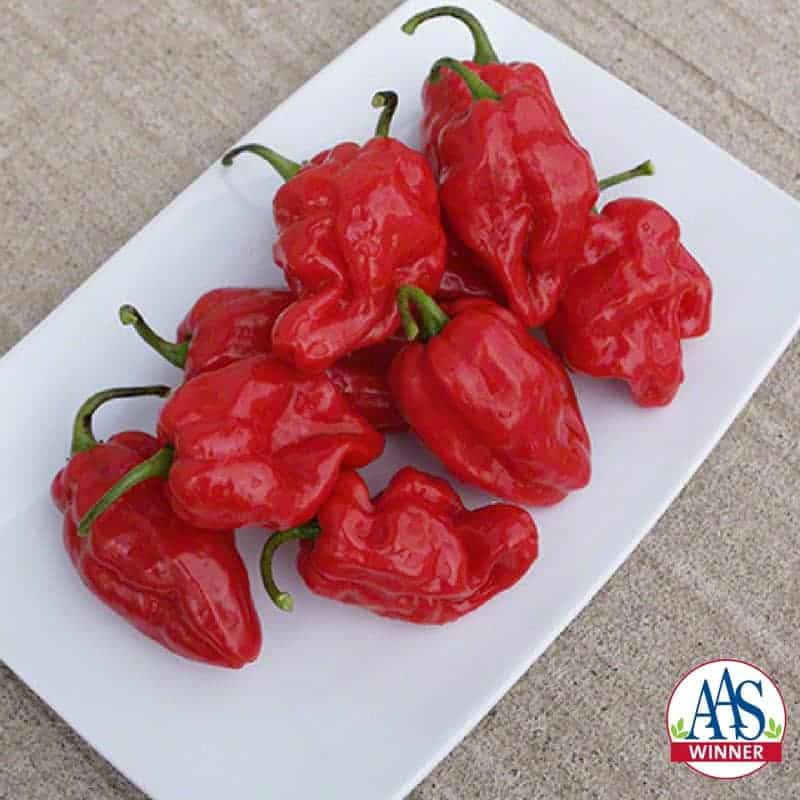 Resembles a traditional habanero pepper in every way with one exception – No Heat! 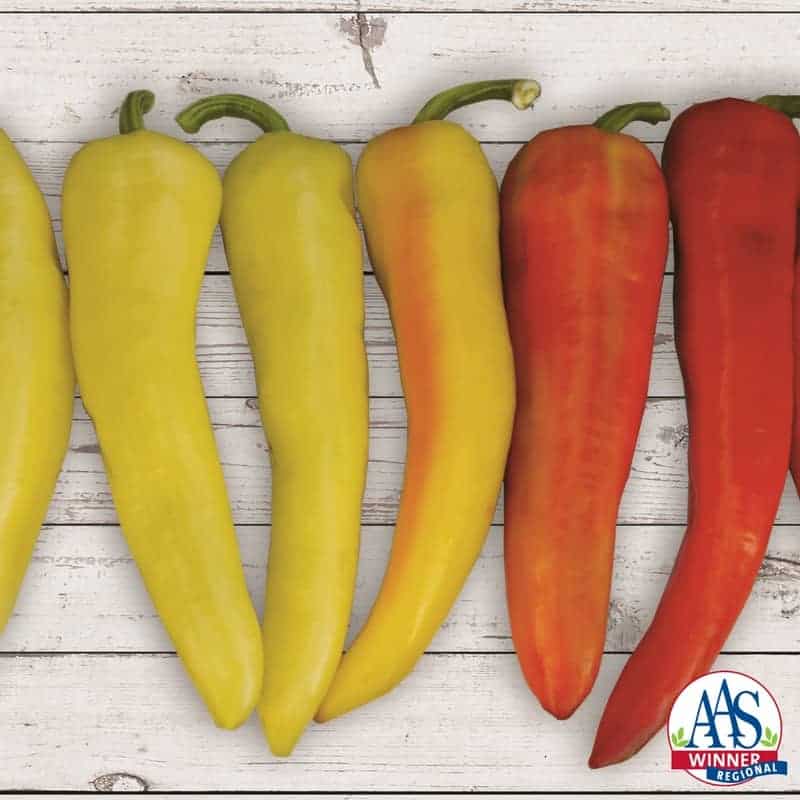 A compact banana pepper that is vigorous and sets a large amount of concentrated fruit. 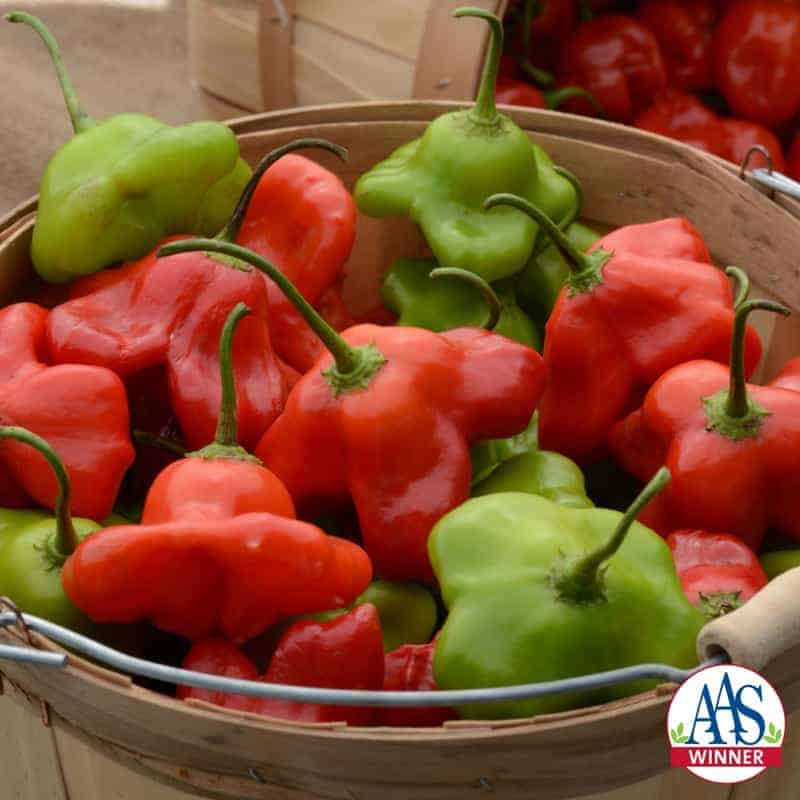 A unique shape has a refreshing, citrusy floral flavor that remains sweet.

Pepper plants are fairly hardy and not as attractive to insects as other vegetables in the garden. To avoid conditions spread by water it is best to keep the leaves as dry as is possible by drip-line watering or giving the plants time to dry in the sun if they are watered from overhead. Pale leaves can indicate that the plants need fertilizer. Big, healthy plants that fail to bloom can indicate over-fertilization. Plants that are planted too close will lack air circulation. Proper air circulation improves pollen distribution which is needed for fruit set. Crowded plants are disease-prone and do not set as well as those that have been properly spaced. The best way to diagnosis an unknown problem is to take a photo of the area and a close-up of the problem and show them to an expert in your area–an extension agent or local nursery employee.

Pepper plants are very attractive and can dress up any patio container or flowerbed. Pepper plants grown in containers are often small but usually mature earlier. Each plant should have a 2-gallon or larger container, deeper than it is wide. The baby plant will look a little lonely at first but will grow to fill the container quickly.

A benefit of container growing is that the plant can be introduced to cool nights or warm days gradually to avoid shock. In the spring, bring plants indoors when nighttime temps are below 55 degrees. Introduce the plants to warm days (over 85 degrees) a few hours at a time until they are acclimated to their final location. Once plants are established, water every few days (or when soil is dry and pulling away from the side of the pot. Fully soak the soil and avoid spraying water on the leaves. Follow the instructions on the fertilizer package or add mature compost as flowers are setting. Taper off on fertilizer, especially nitrogen after plants flower. Nitrogen encourages the plant to put its energy into the leaves and not setting fruit.

Sweet peppers can be harvested at any stage of maturity. Less mature green peppers will generally be green or pale yellow, smaller, crunchy, and have thin walls and a slightly tart flavor. A benefit of harvesting early is that it triggers the plants to produce more fruit. Mature peppers will change color, have thicker walls, and a mild sweet flavor. No matter the stage of harvest, cut the peppers from the plant with clean pruners or kitchen shears to avoid damaging the plant.

No matter how they are grown or used in the kitchen, sweet peppers add beauty, variety, and health to any garden or home.

Pin It for Later 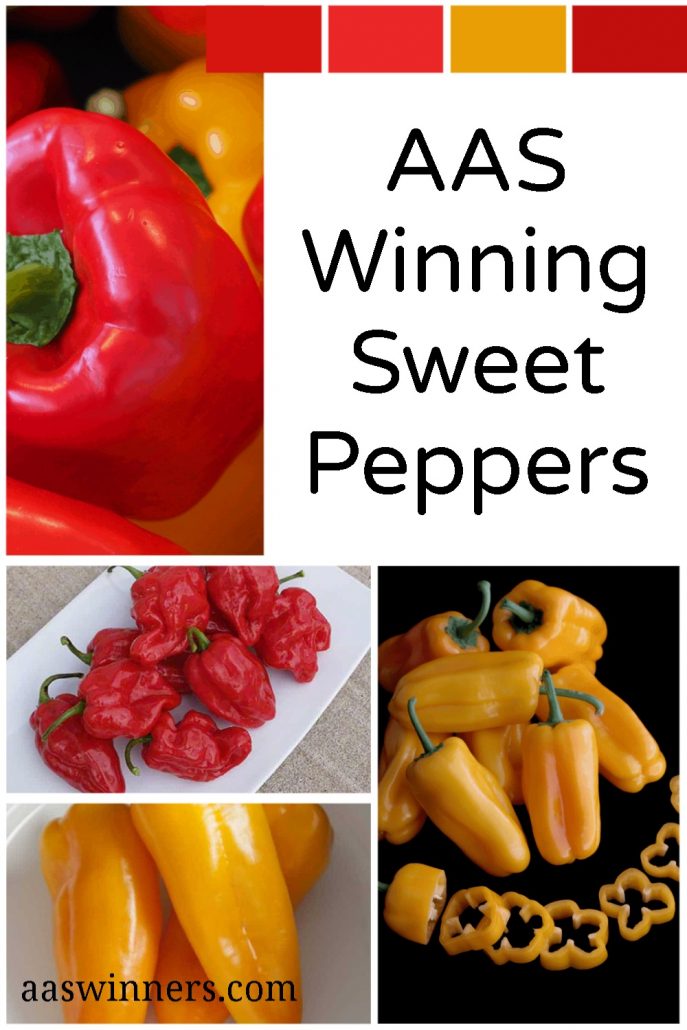